Frederick Douglass: From Slave to Statesman 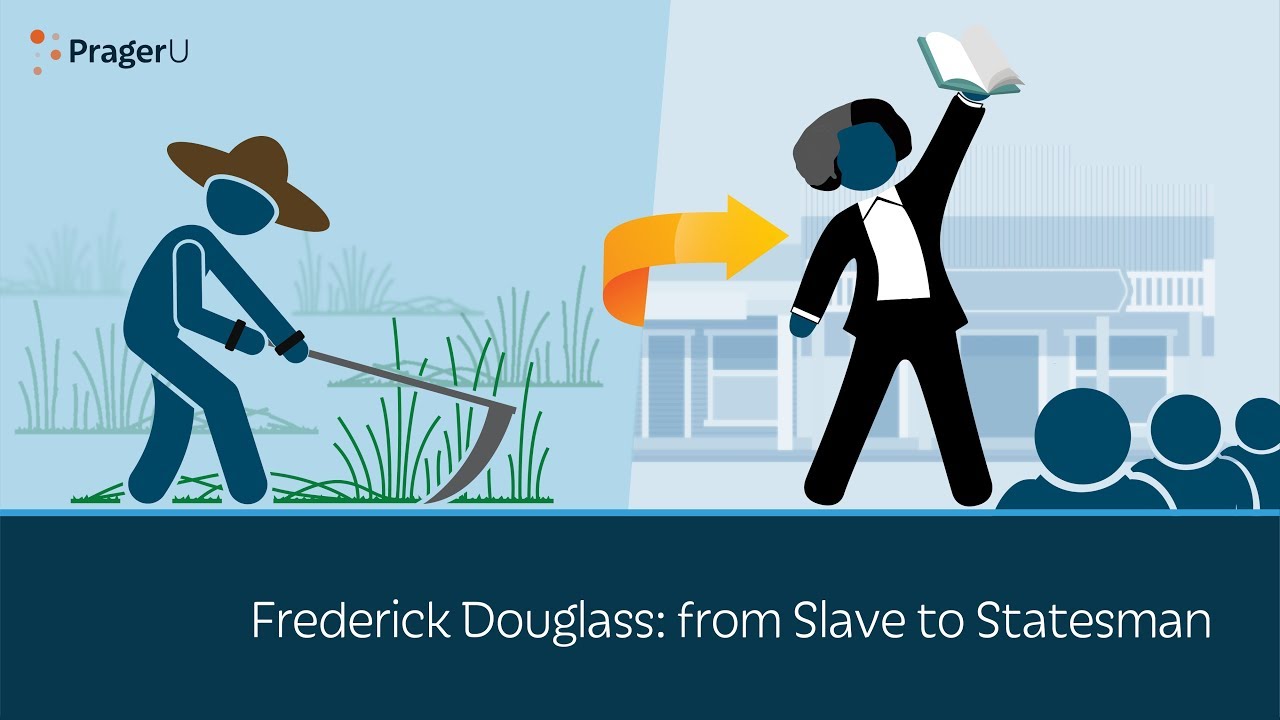 Frederick Douglass was born into slavery, but through his own heroic efforts became one of the most influential advocates for freedom in American history. His journey, a tale both agonizing and inspiring, should be known by everyone. Timothy Sandefur, author of “Frederick Douglass: Self-Made Man,” guides us through Douglass’ amazing life.

This video was made in partnership with the American Battlefield Trust. Learn more about Frederick Douglas at http://bit.ly/2Zf0sSq

Join Prager United to get new swag every quarter! http://l.prageru.com/2c9n6ys

He was one of the most revered Americans of the 19th century. His story of personal triumph—humble origins to national prominence—is equal to or greater than that of Andrew Jackson, Abraham Lincoln, or Ulysses Grant. He never became a politician, but he spoke to presidents as an equal.

His name is Frederick Douglass.

Born a slave, Douglass never knew the exact date of his birth, never knew his father, never saw his mother after the age of seven. This wasn’t uncommon at the time. Slave owners often made a point of separating families. Breaking family bonds increased dependence on the slave owner.

Discipline was maintained through simple fear and destroying self-esteem. A slave could be punished for not working hard enough, but also for working too hard—or even for suggesting labor-saving ideas. Douglass experienced all of this and rebelled against it.
As a teenager, he taught himself to read. This created a desire for freedom. When his owner discovered this disturbing development, he sent him to live with a local farmer, Edward Covey, who made extra money breaking the will of unruly slaves.

Covey beat Douglass every week for six months, often for no reason. And it worked. Soon young Frederick gave up all hope of being free. “The dark night of slavery closed in upon me,” he later wrote.

That all changed one hot August day in 1835. When Covey struck him, Douglass fought back. Where he found the courage, he couldn’t say. The two men struggled until Covey stumbled away exhausted. Covey never laid a hand on Douglass again.

The teenage slave had stood up for himself. He considered this the most important lesson of his life. Years later, he would tell this story when urging black men to enlist in the Union Army to fight the Confederacy. “You owe it to yourself,” he said. “You will stand more erect . . . and be less liable to insult. . . . You [will be] defending your own liberty, honor, manhood, and self-respect.”

Douglass made his escape from slavery in 1838, slipping into the North disguised as a U.S. Navy sailor. At any point along the rail journey, his flimsy cover could have been blown. Displaying a confidence he didn’t actually feel, he bluffed his way past suspicious conductors and runaway-slave hunters.

Once in the North, he joined the radical abolitionist movement and was quickly recognized as a powerful speaker and writer. The movement’s leader, William Lloyd Garrison, burned the Constitution at his July 4th speeches. In Garrison’s view, it legally protected slavery and was therefore irredeemable.

But Douglass came to reject that. He believed that the Constitution was fundamentally opposed to slavery. “Interpreted as it ought to be interpreted,” Douglass said, “the Constitution is a glorious liberty document.”

Not surprisingly, Douglass was a strong supporter of the Republican Party—the new anti-slavery party—and of the Union cause in the Civil War.

Initially, he had doubts about Abraham Lincoln. He didn’t think Lincoln was truly committed to ending slavery. But he warmed up to the Great Emancipator as the conflict wore on. Lincoln, on the other hand, always admired Douglass. “Here comes my friend Douglass,” Lincoln said when he saw him at his second inaugural in 1865.

The Union victory ended slavery. But as the Democratic Party re-established itself in the South in the 1870s and ‘80s, a new kind of racial oppression arose in the form of Jim Crow laws and, even worse, widespread lynching.

For the complete script, visit https://www.prageru.com/video/frederick-douglass-from-slave-to-statesman